The Trail Marker: A Magpie Tale 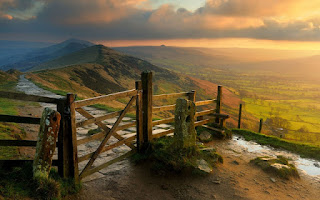 It had been a rough winter and spring, what with the end of a relationship, the loss of a job and the death of a beloved pet.  He felt that after all that, things could only get better.

The summer had been one of healing, with friends supporting him, a new apartment, a job offer, and a new lease on life. Once again, he was approaching life from a place of abundance.  So when he saw some gorgeous photos taken from a 20 mile ridge trail, he vowed to celebrate his renewal by hiking the trail.  It would be an opportunity to travel on his own and contemplate all the good things that were happening in his life.

He left his car in the parking lot at the edge of the forest and set off.  As he approached the trail marker that identified the halfway point, he realized he hadn't seen anyone else during his trek.  The words of Robert Frost came to mind.  It felt like he had definitely chosen the road not taken by others.  But, he had promises to keep... promises to himself.

He looked out over the horizon to savor the moment, then set off again.  It was then that a slight dip in the trail set him off balance. As he tumbled over the ridge all he could think of was the next line of the poem...

Yes, he had miles to go before he slept.  What had started out as an end-of-summer adventure ended as a beginning-of-fall debacle.  "Fall" being the operative word.  Time to start over yet again and put one sprained ankle in front of the other.

Tess over at Willow Manor has been providing inspiration for bloggers with her photo prompts on a site called Magpie Tales.  Stop over to check out who else was inspired this week.

Posted by Paula Wooters at 1:46 PM

Paula Wooters
I play all day. Seriously. It's my job. I wrangle four-year-olds by day and retreat to my quiet place at night to restore my sanity. (Although, I'm not sure that's working out too well.) I write to sort out my thoughts, which are as jumbled as the junk in this crap shack I call home.